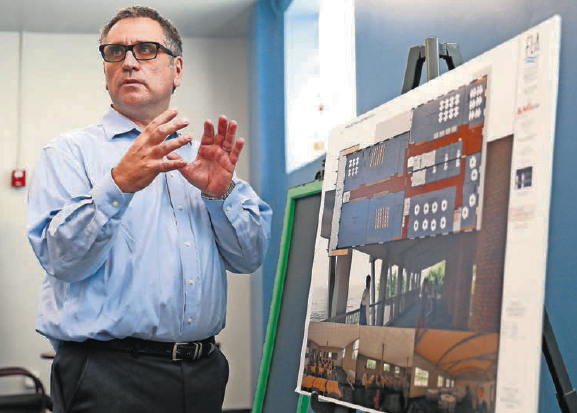 By Jacqueline Bostick from the Panama City News Herald. May 11, 2020.

PANAMA CITY — A nonprofit organization known locally for its work with at-risk teens is diving deep into an expansion of its programs and a $4 million renovation of its 40,000-square foot building.

Established in 1974, Panama City Marine Institute – AMIkids has plans to open in fall of next year as a charter school. Executive Director Ron Boyce said the change is an evolution — one that characterizes the organization’s long-standing commitment to being a diving board for children and young adults to explore their options for success. It’s going to be a really small school; very special purpose, Boyce said Monday morning during a media tour of the PCMI property on Beach Drive. “And, it’s going to be open to anybody.”

“It’s a change for us … and we’re rolling with it,” he said later, noting his teachers are experienced in instruction for all students, including special needs and those with emotional and behavioral disabilities. “We’re hitting all levels. ”

If approved by Bay District Schools for a charter, as a new school, PCMI high school students will have opportunities to earn boating and drone pilot licenses, culinary and construction certifications, as well as Professional Association of Diving Instructors (PADI) Open Water diver certification. Some of the programs are in line with credit requirements for similar programs at Gulf Coast State College. “I’m very confident we’re going to get our charter,” Boyce said, noting the building is currently capable of operating as a school, though still in the development process. Insurance is largely covering the development project, which also includes a new nine-slip dock.

The former 1920′s site of Panama City Machinery and Supply Company will be renovated with energy efficient state-of-the-art designs that will support the expansion. Principal Architect, Antonio Adessi, with Florida Architects explained the design. “This one is hi-tech on the inside,” Adessi said, noting the historic design is only a facade, as the building will be equipped with new technologies. “This is a way to keep it old, but give it new life.”

The architect also designed the Advanced Technology Center building at Gulf Coast State College, a $31.3 million investment. Outlining the difference in the purposes of the facilities, Adessi pointed to the need to maintain the historic facade of downtown Panama City in the design of the new PCMI building. “This one doesn’t have some of the features you have in the ATC when they designed it,” he said. “But the idea was that we wanted to build a landmark for the college, and the county in general.”

“The great opportunity that (Boyce) is pursuing (with the PCMI development) is to show how can you take an old building in downtown Panama City and bring it into the 21st Century, bring it back to life, and make it into a piece that people acquire and have ownership, it belongs back to the community … has a sense of landmark to the community.”

The building will have a nearly 1,000-person occupancy, though the school itself is aiming to enroll just about 150 students. Not only will it have spacious classrooms and technology equipped labs, the building will have multi-purpose spaces with the capability to support small conferences of up to 600 guests. The waterfront-facing second floor will provide ample natural light and viewing of the bay from its balcony. The organization is currently in a fundraising phase to construct the balcony and add lab rooms to the second floor.

It’s the kind of development that works well with the development of downtown, particularly, the St. Joe Company hotel and restaurant at the marina, according to Boyce. “If the hotel wanted to host a conference, we could host that in the summer time for a week or two,” he said.

“It will be like what the ATC building did to GCSC. This will do that for downtown Panama City,” he said. “It will set the tone for the marina development, I think.”

The renewed vision of the organization comes on the heels of the Department of Juvenile Justice’s termination of its contract in 2018, as well as that with Bay District Schools, which, too, worked with PCMI to provide a track for students in need of credit recovery and behavioral modification. Then, in October that same year, Hurricane Michael all but destroyed much of the property. “I feel like sometimes I’m building a sandcastle, and then right at the time I get it done, a wave comes and knocks it over — and I’m starting over again,” Boyce said. “Nothing has stayed the same; I think everybody in Bay County is used to that. But, everybody I’ve talked to is very happy that we’re still open and … very supportive,” he added later.

Despite the setbacks, Boyce said PCMI has continued to serve students through a contract with North Bay Haven Charter Academy and Department of Children and Families. Both contracts will soon end. Still, the horizon is now set to make a greater impact on the students and community PCMI serves.

“If I can find a way for a kid to shine … we’re going to steer him or her towards that,” Boyce said. “The dream of introducing kids to the ocean and science, to get hands-on, and involve regular kids, that’s my goal,” he said. 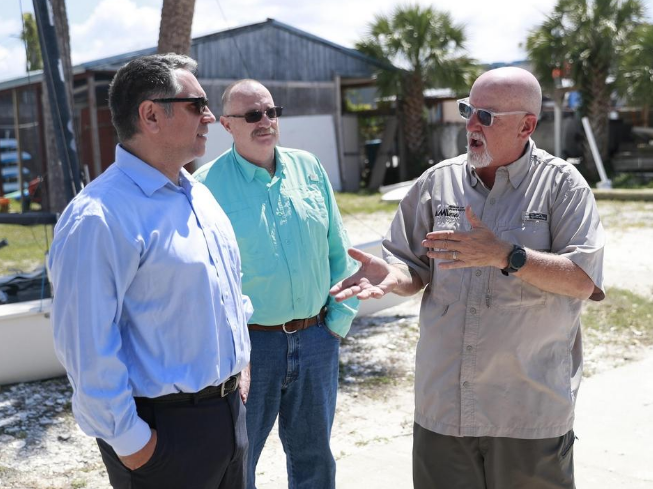 Antonio Adessi, Markus Gemsch and Ron Boyce chat about renovation and education on May 4, 2020 at AMIkids. [Patti Blake/The News Herald]